A survey was conducted with the participation of more than 150 companies about the ways and means that companies do today to achieve balance and the well-being of their employees. Two-thirds of companies have a health program already in operation or to be launched in the near future in two-thirds of companies, the focus of which is in most cases on motivating the exercise and nourishing mental health, a data set by Blue Colibri International Kft.

Until February last year, great emphasis was placed on well-being at work, the so-called luxury and branding of the office, as well as the recreational opportunities that employees of a particular company can take advantage of in the office. Home office was limited in most places, and telecommuting and part-time work were common in very few workplaces. There has also been a major change in this area over the past year, as employers are now facing new challenges: As the epidemic recedes, this important problem may come to the fore again, as office work will be partially resumed, but in many cases a home office will remain in Practicality – so it can be made with a new social welfare toolbar.

Blue Colibri’s survey shows that instead of the already classic brand and office luxury keywords, there is more space for employees to feel safe, to judge their employers as a caretaker. These are, first of all, occupational safety and health measures, which, in addition to satisfaction, greatly contribute to the development of adherence. Another exciting finding is that the focus within well-being has shifted strongly. The research revealed that due to the uncertainty prevailing in 2020 and the length of the lockdown, demand has increased that mental health is the most important area of ​​health protection – 82% of respondents indicated this as a target area. It is also a means of coping with the pressure that has arisen, and encouraging movement, which is considered of prime importance by 77% of employers. 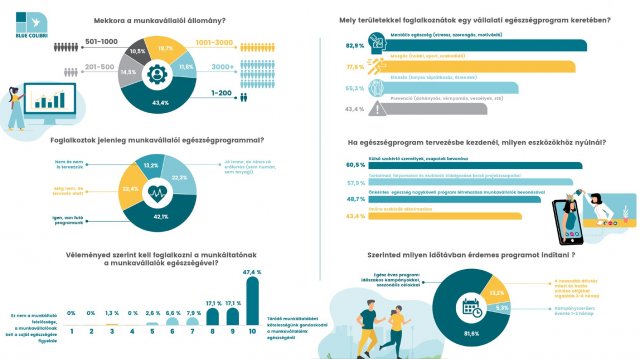 Small and medium enterprises, startups, as well as large multinational companies were represented in the survey, from various sectors. Turns out, two-thirds of them are actually working on an employee health program – they are currently working or currently planning. Based on the opinion of the respondents, it was emphasized that the achievement of health care and the desired impact cannot be measured in months. 81% of companies think of a year-round program that employees can access. In terms of implementation, 58% of companies will build the framework and upload content from in-house resources, and 44% will support the success of the program with online interfaces – making the choice available from the home office or remotely.

Among the fillers was Grundfos, a company organizing for the first time this spring the “Move, Grundfos!” Campaign. The campaign, joined by more than 400 domestic workers who completed 1,140 activities, is only halfway through. “It is evident from the enthusiasm and feedback from our colleagues that a strong and well-functioning workplace community also needs support and reinforcement.” Melinda Brisky, a communications specialist, said. A Mozdulj, Grundfos! The primary interface of the program is the Blue Colibri app, where programs, events, tests, and surveys are shared with employees and used as the primary contact point during the month of the campaign. “It’s great to see that there are groups in the app that face the daily challenge together, and there are colleagues, as a result of the campaign, finally breaking into everyday life with exercise and sports. We gave them the motivation to be grateful, because they are always late so far.” Melinda Presky detailed the key results of the campaign.

READ  A small garden can also become a bee graveyard 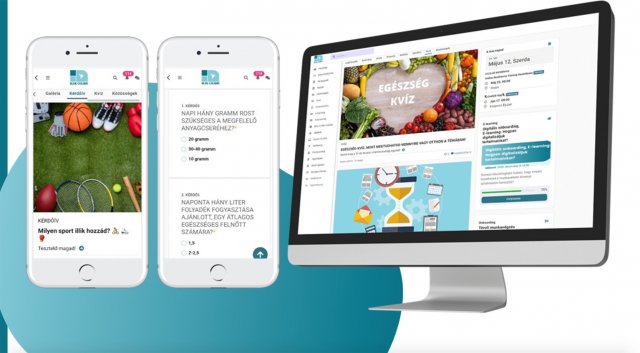 The Trenkwalder Group, one of the leading employee services providers in Central and Eastern Europe, attaches great importance to health support, particularly with regard to employee participation. They announced Sports Month in May, which was a resounding success, and their colleagues are attending training sessions as part of a new initiative to preserve mental health. “The most important result of Sports Month for us was that it was the latest movement at the organizational level. In the past three weeks, nearly 600 results were received either on a kilometer or minute basis in various sports. The Sports Month connection was directed entirely to the online platform developed by Blue. Colibri, where the team also helped us develop an interface through which colleagues can submit their collected points. I think this online interface definitely speeds up communication, is aesthetically framed, and the biggest advantage of using it is that the border with it is the starry sky. “ Said Catalin Medley, head of the human resources team.

Catalin Marton, Director of Human Resources and Corporate Social Responsibility at Praktiker, also spoke in regards to the survey, as the DIY chain of stores places great emphasis on the employee experience, of which one of the most important components is the physical and mental health of the employees. “You can count on us for several years. The support program. It is an anonymous support system that is provided to the employee and his immediate family members. In the legal, financial, psychological and health fields you can request five free and appropriate consultations on a problem.” – Catalin Marton participated. He said that all employees are being heard in all cases, even having individual answers to any problems. Among other things, the intercom app is a good interface for this, and since January of this year they have been waiting for their colleagues’ suggestions on topics not only in business matters, but also on health-related issues, with which they are organizing discussions. Their expert partners.

For those interested in the topic, a webinar entitled “A Balanced Factor Webinar” will be organized by the Blue Colibri team, where Ursulia Pinky, Psychology Consultant at Mindset Psychology Therapy and Counseling Center, Bernadett Gelsei, Decision Developer, President The Welfare Association will speak as a professional speaker. Details of the free program and registration are available at the following link: https://forms.gle/zs4T2CcvG7yxfuty6